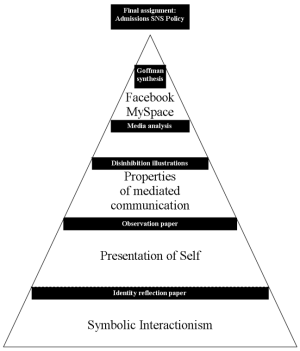 During the third week we began to transition from the traditional sociological ideas in the first two weeks to more modern ideas that directly grapple with the advancement in information and communication technologies (ICTs).Â  To make this transition, we read and discussed the first two chapters from John Palfrey and Urs Gasser’s excellent book Born Digital.

The first chapter of Born Digital discusses “identity” (I put that in quotes because the general idea is approached differently in this book compared to the authors we’ve previously read and discussed so this is a reinforcement – for myself, my students, and for you – of the idea that there are many ideas and conceptions of identity).Â  Before diving into a discussion of the material on Monday, I opened with 10 minutes of a video clip of John Palfrey, one of the authors, discussing the book and some of its premises (I meant to show a slightly different video that is higher quality but the video I showed worked just as well). The main thing that I wanted to get out of that video clip – aside from a general introduction of one of the authors and his point of view – is an understanding of how Palfrey and Gasser defined “digital native.” That’s a key idea in their book and their careful and explicit definition is a very important and interesting advancement in how we conceive of digital natives.Â  Unlike many who do not define what they mean with their use of the phrase digital native (an omission that often seems to be rooted in their own confusion and lack of rigor i.e. they don’t define it because they don’t have a good definition or haven’t really given it the thought and attention it deserves), Palfrey and Gasser explicitly define digital natives as those (a) born after 1980 (b) with access to and (c) comfort and knowledge of ICTs. This is an important definition as it (wisely) limits their discussion to a subset of the entire population of youths – those who are on the “right” side of both the digital divide (access) and the participation gap (comfort and knowledge).

To discuss the materials (remember, I lecture very rarely and only for short periods of time) I used an active learning activity that requires the students to focus on a small part of the reading they select and discuss. First, I had each student spend a few minutes silently selecting a short quote from the reading that spoke to or interested them.Â  Second, they broke into groups of 3.Â  Third, one person read their quote.Â  That person then sat quietly for a few minutes while the other two memebrs of the group reacted to the quote.Â  Finally, the person who first read the quote explained why they selected it.Â  The same process repeated twice so all three members of each group presented their quote.Â  Afterwards, we all came together and I chose a few students to read their quote aloud and share what they and their group discussed.Â  The exercise seemed to work well and when I explicitly asked for feedback about the exercise my students agreed that it worked well.Â  I tried to use a structured discussion protocol during the activity where I kept track of time and let them know when they should be moving on to different phases of the activity but that part didn’t seem to work too well as my students kept themselves on track well without my intervention so the protocol may not be necessary in the future.

The week’s second class focused on the information that is collected about us, stored, and made available online.Â  Palfrey and Gasser discuss this in their second chapter, “Digital dossiers.”Â  The activity I created for this topic was to break the class into three groups.Â  Each group had to answer an identical set of questions but each group had a different focus. One group focused on their grandparents’ generation, one on their generation, and the third on their grandchildren’s generation. The specific questions dealt with the type of information that has been, is being, or will be collected about people in that generation: who owns that information, how it’s made available, how that information is or is not linked together, etc. I hoped to motivate discussion and thought about how the information that is collected about us has changed and continues to change. Unfortunately, much of that information and activity lies outside of our individual control so it was a bit of a depressing conversation (I spent time talking with one group that finished early and I ended up talking about IBM’s role in the Holocaust and the historical role and rise of organized information collection related to national censuses, Social Security, insurance and pensions, etc.). This activity worked out moderately well in both my opinion and my students’.Â  I really like the general idea of the activity but it seems to lack some polish although I’m still not quite sure exactly what that polish is and how to apply it.

One interesting thing that came up this week occured as a result of the feedback that I solicit at the end of every class period (the Classroom Assessment Techniques (CATs) mentioned in previous posts). On Monday, I asked my students to simply write how their views of identity have changed (if at all) during the course of this class. The responses to that question were, of course, interesting (and mixed) but several students also hinted at or directly mentioned how they were or have been restricting the information they post online because of fears about safety. I view a large part of this class and my role in this class as “setting the record straight” by introducing the good research that’s been done and contrasting that research with the common public perceptions, perceptions often created and driven by the popular media and press. So I used the first 15 minutes of class on Wednesday – after having read and digested the responses to Monday’s question – to discuss some of the research and realities of online safety and hazards. To do this, I showed a short clip from a 2007 panel discussion of youths’ online safety and spent a few minutes discussing some of that research. In addition to being an interesting discussion in itself, this should be helpful for my students when we more explicitly address the media perceptions and reports of online communication and safety in a few weeks.