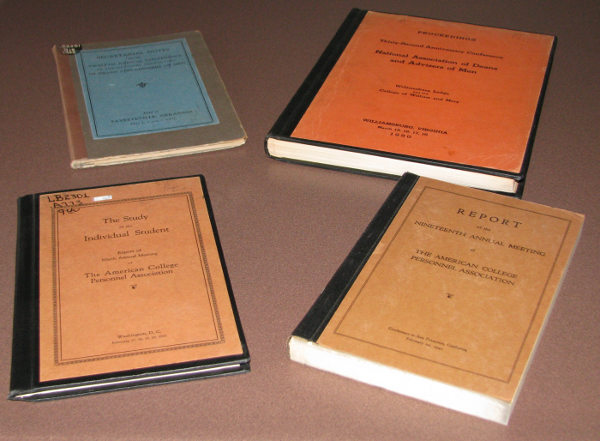 I’ve written a few times about historical research I’ve done looking into how U.S. student affairs professionals have used and viewed technology throughout the 20th century.Â  Although I don’t know where my current job search will take me, I feel a responsibility to bring some closure to this research and then ensure it is somehow published or shared.

Much of my previous work was based on documents held at the National Student Affairs Archives at Bowling Green State University, especially the conference proceedings and programs for ACPA and NASPA.Â  My work is incomplete, however, because those (wonderful!) archives did not have most of the conference proceedings from the first half of the century.Â  However, another scholar told me that my own institution, Indiana University, has many of these proceedings.Â  Since I will probably be leaving Bloomington soon, I finally followed up on this tip and requested all of the conference proceedings in the IU library.Â  The two collections – IU and BGSU – complement each other very nicely, almost as if a single collection of all of the proceedings were divided evenly between the two libraries.Â  It would probably be a bibliographic faux pas to ask one of these libraries to donate their materials to the other one but it sure would be nice to have a nearly complete collection in one place.Â  At least the two universities are only a few hours apart so it’s not terribly burdensome for scholars who want to consult these materials.

I’ve only started reading through these documents and I’m already very glad that I requested them!Â Â  In just the handful of proceedings that I’ve read so far I’ve found interesting things such as:

Even though I’ve just begun reading through these proceedings, I already have examples of (a) worry about the effects of technology on education and students, (b) discussions of the potential benefits of technology in student affairs administration, especially record keeping and processing, (c) demonstrations of new technology by vendors and pioneering institutions, and (d) innovative uses of technology initiated by members of the professional organizations themselves.Â  A history of regular and continued use of technology, including original innovations and cutting-edge uses, doesn’t seem to be part of the mainstream historical narrative of the student affairs profession but that seems to be the story I’m finding in the historical artifacts.

(Off-topic: Holy crap are these proceedings products of their times!Â  I knew that the history of these two professional organizations was very gendered given their historical roots but I didn’t expect the volume of casual sexism documented in these proceedings!Â  I did, however, expect some degree of racism and a large homophobia and – sadly – my expectations have been met.Â  I’m not even looking for these things but they often come screaming out of the pages. I’m reminded of a moment in this story where a college student asks during a discussion about the Founding Fathers: “If the Founders loved the humanities so much, how come they treated the natives so badly?” It’s mentally and spiritually jarring to read pages and pages of passionate discussion about the importance of each student and their intellectual and moral development followed by a casual dismissal of the competence of deans of women or a reminder of the psychological and moral depravity of homosexuality. The incongruity and dissonance makes me wonder what normal, accepted practices and beliefs we hold today will cause these “Holy crap!” moments for future generations when they read our e-mails and watch our videos.)