I’ve whined about bad infographics and I try to avoid complaining about their continuing proliferation.  But I can’t bite my tongue about this ACPA infographic purporting to show information about technology usage by undergraduate students.  It’s bad not just because it’s misrepresenting information but because it’s doing so in the specific context of making a call for quality research and leadership in higher education.

There are some serious problems with the layout and structure of the infographic but let’s focus on the larger issues of data quality and (mis)representation.  I’ve labeled the three major sections of this infographic in the image to the right and I’ll use those numbers below to discuss each section. 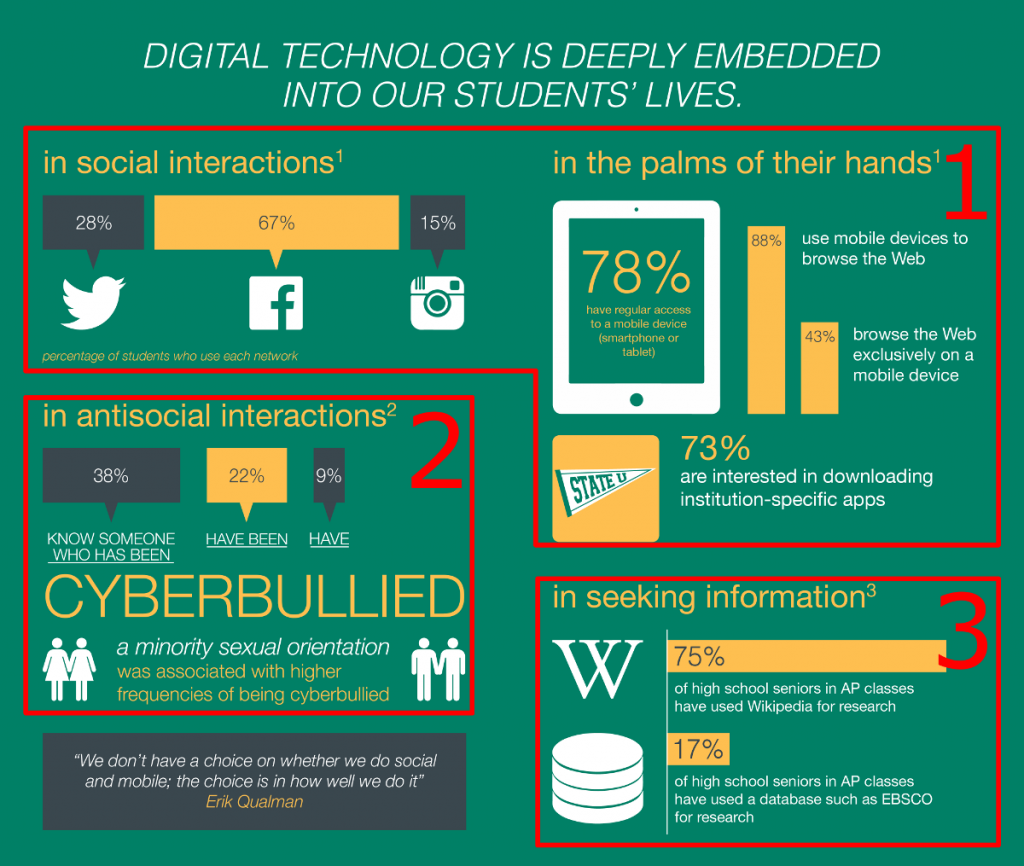 Before I dive into the specific sections, however, I have to ask: Why aren’t the sources cited on the infographic? They’re listed on the ACPA president’s blog post (and perhaps other places) but it’s perplexing that the authors of this document didn’t think it important to credit their sources in their image.

Section 1: Student use of technology in social interactions and on mobile devices

The primary problem with this section is that uses this Noel-Lovitz report as its sole source of information and generalizes was beyond the bounds of that source.  The report is based on a phone survey of “2,018 college-bound high school juniors and seniors (p. 2)” but that limitation is completely lost in this infographic.  If this infographic is supposed to be about all U.S. undergraduate students, it’s inappriopriate to generalize from a survey of high school students and misleading to project their behaviors and desires directly onto undergraduate students.  For example, just over half (51.1%) of all undergraduate students are 21 years old or younger (source) so it’s problematic to assume that the half of college students who are over 21 exhibit the same behaviors and desires as high school students.

I can’t help but also note just how bad the visual display of information is in the “social interactions” part of this infographic.  The three proportionally-sized rectangles placed immediately next to one another make the entire thing appear to be one horizontal stacked bar when in fact they are three independent values unrelated to one another. This is very misleading!

It’s laudable to include information about a specific use of technology that is harmful for many students but like the first section this information is inappropriately and irresponsibly generalizing from a small survey to a large population.  In this instance, 276 responses to a survey of students at one university are being presented as representative of all students.  Further, the one journal article cited as the source for these data doesn’t provide very much information about the survey used to gather these data so we don’t even have many reassurances about the quality of these 276 responses.  And although response rate isn’t the only indicator of data quality we should use to evaluate survey data, this particular survey only had a 1.6% response rate which is quite worrying and makes me wonder if the data are even representative of the students at that one university.

The third section of this infographic is well-labeled and uses a high quality source.  I’m not sure how useful it is to present information about high school students in AP classes if we’re interested in the broader undergraduate population but at least the infographic correctly labels the data so we can make that judgement ourselves. In fact, the impeccable source and labels used in this section make the problems in other two sections even more perplexing.

This is all very frustrating given the context of the image in the ACPA president’s blog post that explicitly calls for ACPA to “advance the application of digital technology in student affairs scholarship and practice and to further enhance ACPA’s digital stamp and its role as a leader in higher education in the information age.”  Given that context, I don’t what to make of the problems with this infographic.  Is this just a sloppy image hurriedly put together by one or two people who made some embarassing errors in judgement?  Or does this reveal some larger problems with how some student affairs professionals locate, apply, and reference research?*

* I bet that one problem is that many U.S. college and university administrators, including those in student affairs, automatically think of “college student” as meaning “young undergraduate student at 4-year non-profit college or university.”  It’s completely natrual that we all tend to focus on the students on our campuses but when discussing the larger context – such as when working on a task force in an international professional organization that includes members from all sectors of higher education – those assumptions need to at least be made clear if not completely set aside.  In other words, it’s somewhat understandable if the authors of this image only work with younger students at 4-year institutions because then some of their generalizations make some sense.  They’re still inappropriate and indefensible generalizations, however, but they’re at least understandable.